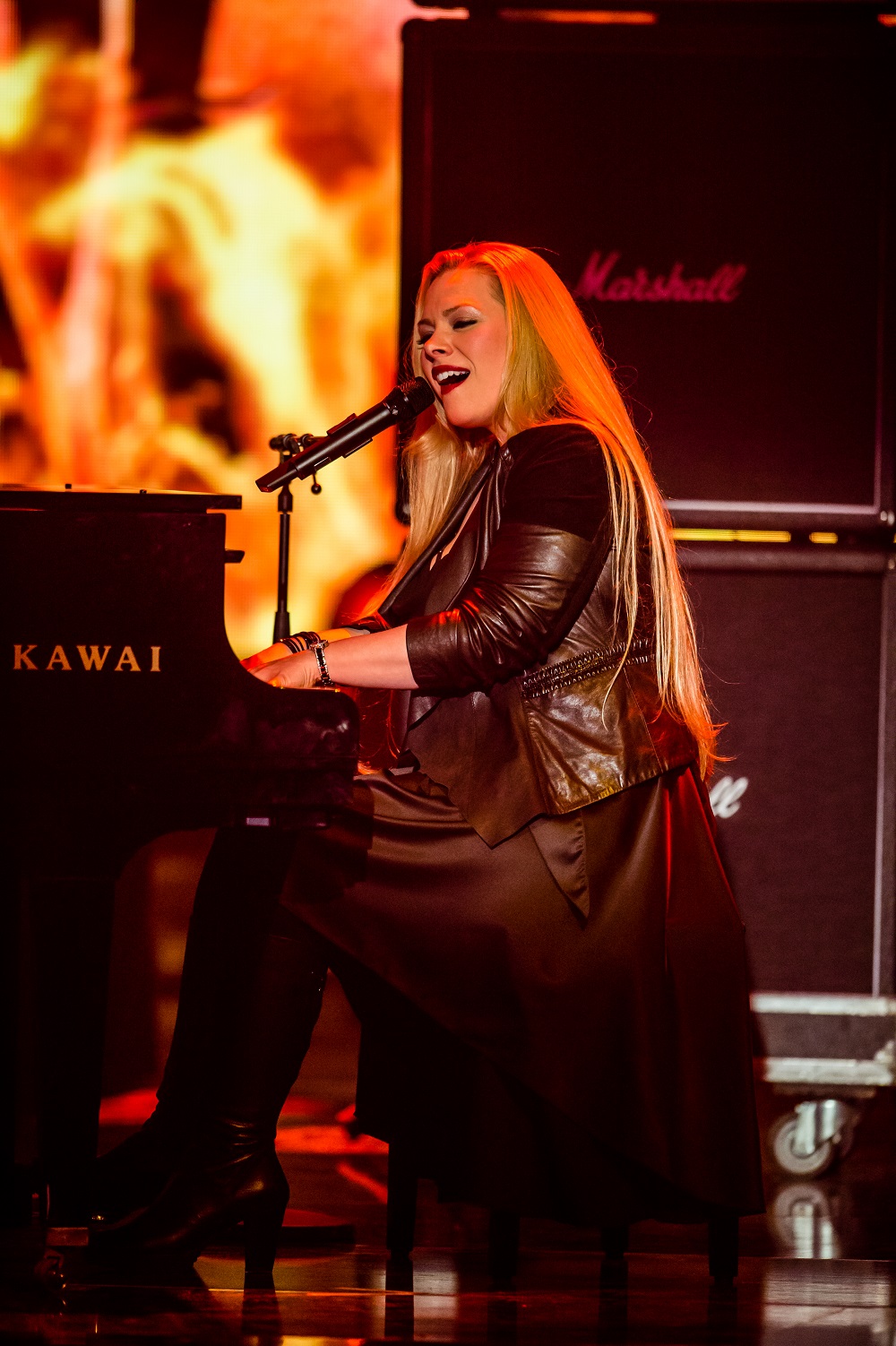 “Amanda Somerville (born March 7, 1979) is an American singer-songwriter and vocal coach who resides in Wolfsburg, Germany. She is known primarily for her work with many European symphonic metal bands.

Somerville was raised in Flushing, Michigan. She attended Flushing Senior High School, graduating in 1997, graduating a full year early and winning a scholarship for graduating with high honors to the University of Michigan in Flint, Michigan, where she majored in psychology. Somerville moved to Wolfsburg, Germany in 1999, where she has resided, working mainly in Germany and the Netherlands.

Somerville has written and recorded with bands such as After Forever, Edguy, Kamelot, Epica, Avantasia, and Docker’s Guild, and has produced two solo albums. Her solo releases to date are primarily soft and elegant pop rock with some hard rock, folk and soul music influences. Somerville herself wrote and contributed instrumentally to all of the songs on her solo albums, with only one exception, “Out” from the album Windows (written by Sascha Paeth).

She collaborated with several of these metal bands alongside producers Sascha Paeth and Michael Rodenberg, which led her to collaborate with multi-instrumentalist Robert Hunecke-Rizzo, co-writing the rock opera Aina. Later she made a similar collaboration with guitarist Sander Gommans (After Forever), providing vocals and lyrical concept for the project HDK. In 2008, she toured America with Dutch heavy metal band Epica, while regular vocalist Simone Simons recovered from a staph infection.

In 2010, she collaborated with Michael Kiske (ex-Helloween singer) on a musical project entitled Kiske/Somerville. The band is a melodic metal act put together by Frontiers Records, a similar project as Allen/Lande. Songwriting and producing was done by Primal Fear bassist Mat Sinner with collaboration by guitarist Magnus Karlsson (Allen/Lande, also from Primal Fear), Sander Gommans, Jimmy Kresic and Somerville herself. Their first single, “Silence”, was released on August 20. Their self-titled album was released on 24 September 2010 by Frontiers Records, after the single accompanied by a music video for “Silence”. A music video was also made for the song “If I Had One Wish.” Somerville contributed creatively to the album by writing three of its songs: “A Thousand Suns,” “Arise” and “Set Afire,” all co-written with Sander Gommans.

Somerville was also one of the live guest vocalists for Tobias Sammet’s metal opera Avantasia world tours in 2008, 2010, 2013 and 2016. Her role onstage included singing backing vocals during the whole setlist and performing lead vocals for the songs “Farewell,” “The Wicked Symphony,” “Lost in Space” and “Sign of the Cross.”

In 2011, Somerville finally released her first heavy metal-oriented project, called Trillium, with the record company Frontiers Records. The project has contributions by Sascha Paeth, Michael Rodenberg, Sander Gommans and a guest appearance of Jørn Lande on a duet vocal track with Somerville”